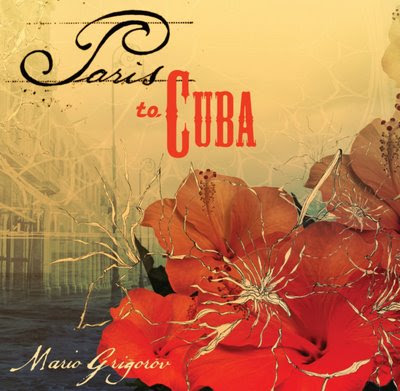 The ten tracks on Paris To Cuba are the embodiment of summertime. Composed and created by Mario Grigorov, the album’s sound conjures up beautiful complexions, mid-afternoon mojitos, linen garments, and vintage Cadillacs. This is music that immediately evokes an aural landscape, a narrative of striking up a wandering romance with a stranger, a “paseo” through Plaza Vieja or a sunset on the Seine. Lilting, sensual brass sections flirt with gentle vocals on “I See”, “Every Little Moment”, and “Snake Eyes”- the three tracks which feature singer, Melissa Newman. Blending hints of Pink Martini and Buena Vista Social Club, the percussion section laps as a wave on an empty beach. It is easy for the listener to get lost in the guitar solos, mysterious accordion and nostalgic, sweeping strings. This is not your typical jazz or world record.

Mario Grigorov, the mastermind behind the record, is best known for conceiving and creating the 1998 classical crossover hit, Aria, with composer Paul Schwartz. The album immediately landed on Billboard’s Classical Crossover chart, beating out a Philip Glass soundtrack, a John Williams/Itzhak Perlman collaboration, and even the London Symphony Orchestra’s Star Wars, Episode IV: A New Hope. Writer Douglas Levy declared Aria as “the CD that could save classical music,” and the following two releases within the series also debuted within the Billboard Top 10 (where they remained for over two years). Aria sold over half a million copies worldwide and was licensed to Café Del Mar. Another music career highlight for Grigorov is was his groundbreaking debut record, Rhymes with Orange in 1994 (produced by Oscar Castro-Neves and Miles Goodman) about which All Music Guide said, “A virtuoso with a very strong classical influence but the ability to improvise masterfully, Grigorov reworks ‘Body and Soul’ and performs 11 of his originals.”

Mario has scored countless acclaimed movies, among them Oscar winners and festival darlings; most recently, Lee Daniels’ Sundance (’09) success, Precious. The film, whose cast members include Mo’Nique, Paula Patton, Lenny Kravitz, and Mariah Carey, took home the ‘Grand Jury Award’ for best feature film and ‘Audience Choice Award’ at the 2009 Sundance Film Festival. At the 1998 Hamptons International Film Festival, Mario was recognized with a ‘Best Original Score’ award for his work on Leonardo Ricagni’s El Chevrolé. Another film he composed music for is Taxi to the Dark Side, which won a 2008 Oscar for Best Documentary. Mario Grigorov is also the founder of Siblings Music, a New York City-based composition and production company started in 2005.

Mario explains his inspiration behind the album:

“Every time I go to Paris, I get inspired. I start thinking about ways I can embrace the city and absorb its magic…

This album takes me back to my time there, and I reflect on how I have always enjoyed traditional and classical French music – been intrigued by the use of melody and sultry textures. I started playing with some melodies on the piano; inspired by the Parisian mood and architecture, I was trying to re-create the buildings I had seen that stood like frozen compositions. The compositions I began to write would soon lend themselves to a melding with the energy and simplicity of the music I also love from Cuba, along with all of its influences.

It’s not always easy to combine styles of music from their technical anatomies, but I was in no way trying to do that here. This album, inspired by my appreciation of both styles, came about from the feel-good spirit that both Paris and Cuba share. I must admit, working with my good friend Melissa Newman brought it all together; she embodies the spirit and beauty of these musical cultures. Her voice created the perfect accent for this project.”

Melissa Newman’s talents span from painting, to poetry, to singing, to writing lyrics. As a vocalist, Melissa studied opera under legendary voice teacher Marlena Malas. Performing at venues such as The Russian Tea Room, Melissa is a seasoned live performer in Manhattan as well as Chicago. Eminent song and jingle writer, Robin Batteau, hired Melissa to collaborate with him on a well-known commercial project featured during the Superbowl. Batteau ultimately connected Melissa to Mario Grigorov, who was immediately inspired by her voice; describing it as “a cross between Billie Holiday and Patsy Cline”.

Email ThisBlogThis!Share to TwitterShare to FacebookShare to Pinterest
Categories: accessories, accessories - other, Music